Iran: another year on the edge of the volcano Power struggles and nuclear ambitions mean that Iran and the Middle East will remain volatile and any peace will be precarious

Simon Tisdall The Guardian, Tuesday 1 January 2013Jump to comments (69) Ready for war? Members of the Iranian Revolutionary Guard navy on parade. Photograph: Reuters The spectre of military confrontation with Iran, igniting a wider Middle East conflict, looms large as 2013 begins. If you feel you have been here before, you have. According to recent reports from Israel, Binyamin Netanyahu was ready to attack Tehran's suspect nuclear facilities as long ago as 2010, but was blocked by his two top army and intelligence chiefs. What makes 2013 especially dangerous is that potential war-triggers are more numerous and more finely balanced than two years ago. Iran's nuclear weapons-related and associated missile programmes are more advanced, or so the western powers believe. In Israel, meanwhile, the two recalcitran…
إرسال تعليق
قراءة المزيد 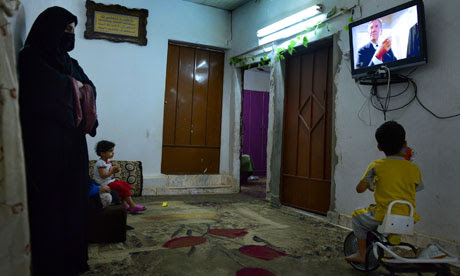 Saudi Arabia's riches conceal a growing problem of poverty In a country with vast oil wealth and lavish royalty, an estimated quarter of Saudis live below the poverty line

Kevin Sullivan for the Washington Post Guardian Weekly, Tuesday 1 January 2013 11.09 GMTJump to comments (111)
The children of Souad Al-Shamir watch television in their living room in Riyadh, Saudi Arabia. Photograph: Linda Davidson/Washington Post A few kilometres from the blinged-out shopping malls of Saudi Arabia's capital, Souad al-Shamir lives in a concrete house on a trash-strewn alley. She has no job, no money, five children under 14 and an unemployed husband who is laid up with chronic heart problems. "We are at the bottom," she said, sobbing hard behind a black veil that left only her eyes visible. "My kids are crying and I can't provide for them." Millions of Saudis struggle on the fringes of one of the world's most powerful economies, where jobs and welfare programmes ha…
إرسال تعليق
قراءة المزيد 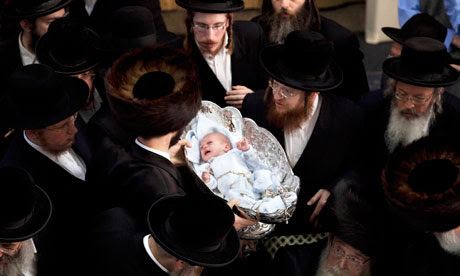 Harriet Sherwood in Jerusalem guardian.co.uk, Tuesday 1 January 2013 12.56 GMT
A rabbi blesses a baby during the pidyon haben ritual in Bnei Brak, Israel. Photograph: Abir Sultan/EPA Israel's Jewish population has passed the symbolically significant 6 million mark for the first time – equivalent to the number of Jews killed in the Holocaust. Figures released by the central bureau of statistics this week show the total population of Israel at 7.98 million, 75.4% of whom are Jewish. Just over 20% are Arab and 4% are defined as "other". "It's a great joy to know there are more than 6 million Jews in Israel," said Dina Porat, chief historian of Yad Vashem, Israel's Holocaust museum and head of the Kantor centre for the study of contemporary European Jewry. "But worldwide we are st…
إرسال تعليق
قراءة المزيد
المزيد من المشاركات
الانتقال إلى الملف الشخصي