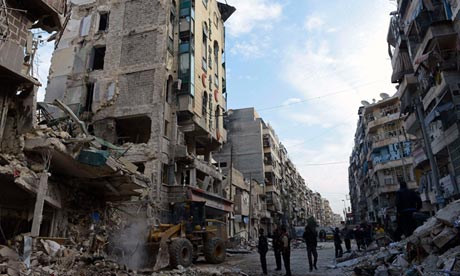 Syrian rebels capture three military bases in a week Attacks yield large number of weapons, which had been in short supply · ·Martin Chulovin Beirut ·guardian.co.uk,Friday 23 November 2012
Syrians watch a bulldozer clear debris outside al-Shifa hospital in Aleppo, hit by a bomb dropped from a jet. Photograph: Francisco Leong/AFP/Getty Images Syrian rebels' success in seizing three military bases in less than a week has underscored the growing difficulty faced by Damascus in securing its outposts and stopping a rebel encroachment that has claimed large swaths of the east and north of the country. Attacks on the bases, one north-east of Aleppo, a second at Mayedin in the far east and a third near Damascus, yielded a large number of weapons, which had been in desperately short supply, especially in positions acrossSyria's second city. The impact of the new weapons seemed to have been felt immediately along northern frontlines, where Kurdish groups loyal to the Assad regime were on Frida…
إرسال تعليق
قراءة المزيد
المزيد من المشاركات
الانتقال إلى الملف الشخصي